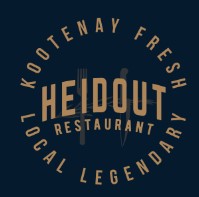 The Heid Out features food and ales fresh from the Kootenays. As the newest incarnation of Cranbrook’s landmark Heidi’s Restaurant, the Heid Out has been completely remodeled. It’s now the Kootenays only Brewhouse with a visually stunning restaurant and pub showcasing the talents of four Red Seal Chefs. The menu at the Heid Out features some of your favorite dishes from Heidi’s Restaurant, as well as new takes on traditional fare and seasonal offerings. All food is handmade in our kitchen with ingredients sourced fresh from the Kootenays’ local farms and producers.

The Heid Out’s culinary team is led by Chef Rusty Cox. Rusty gained international experience with the Fairmont Hotel Group and is a master ice carver whose work was featured at the Vancouver Olympics. More recently, Rusty’s carvings have been highlighted on the Molson Mountain Ice Rink TV commercials.

The Heid Out proudly features six artisanal ales along with limited-release seasonal offerings—all brewed on premise by our sister company Fisher Peak Brewing Company. Fisher Peak Brewing Company beers are brewed under the watchful eyes of Brewmasters Mark Simpson and Jordon Aasland. Mark has worked with Molson, Coors, Kirin and Lowenbrau before a long stint with Granville Island Brewing. All beers are lovingly handcrafted to be enjoyed on their own or as the perfect complement to the Heidout’s fresh from the Kootenays food.

Come see for yourself what the Heid Out’s all about and be among the first to learn the news of our upcoming growth and evolution.